One of the best ways to handling conflict is by giving personal coaching to the members of the team. Conflict among team members is bound to happen, especially when people interact as often as they do on Agile teams. Conflict can be constructive particularly if the ensuing team interplay leads to a deeper understanding and resolution of the issue but more often than not, conflict derails teamwork. And because teams play such an important part in Agile practices, any team dysfunction can be extremely disruptive.

One common source of conflict for Agile teams is a lack of trust among team members. Agile teams depend on a feeling of mutual trust; team members must believe that everyone is working for the good of the team, not in their own best interest. For example, team members must be confident that individuals are selecting tasks from the task list because the tasks are the most important ones to complete, not because they are the easiest or most enjoyable to work on. All team members must trust that they can ask for assistance without fear of judgment or repercussions; after all, one of the responsibilities of the team is to develop generalists with diverse skills, not to encourage specialists to jealously hoard their expertise. Teams must also guard against developing “heroes”—people who select all of the difficult or lengthy tasks from the task list because they feel it will help other members of the team or increase their own stature in the organization. By taking these complex tasks away from less-experienced team members, these “heroes”—even if they are well intentioned—may damage team confidence and stifle team development.

Here are some tips for dealing with team conflict:

When conflict does occur, it is important to remember that, as an Agile leader, you are leading the team, not managing the team. Just because you think there might be a conflict doesn’t mean you should rush in to resolve it. Wait to see if the team members can resolve the conflict themselves. Just as they are empowered to choose the best way to meet the project objectives, team members must also be encouraged to resolve conflicts and improve working relationships without intervention.

This new way of resolving conflicts may cause problems, especially in organizations that are transitioning from a traditional Waterfall methodology to Agile practices. If management (and other stakeholders) believes that part of your work as a leader is to solve the team’s problems, they may think that you are not doing your job if you leave the team to try to resolve the conflict by itself first. You will need to clearly explain that allowing the team to solve its own problems creates long-term benefits for the team, not just a short-term fix to an individual problem. By doing so, you are developing more people with the skills to solve problems, which benefits the entire organization.

Intervention: Help the team resolve conflicts that it can’t settle

If the team is unable to resolve the conflict on its own, you will have to step in to help them develop a solution. It might be helpful to familiarize yourself with the different approaches experts use to deal with conflict; Esther Derby discusses several of these approaches in her article Approaching a Conflict in Style on the StickyMinds.com web site. By acquainting yourself with each of these approaches, you will be able to select the best one to employ in each situation to bring it to an effective resolution.

In some cases, you may have to encourage reluctant team members to confront the people they are in conflict with. Agile coach Lyssa Adkins has devised a “three-step intervention path” to help unwilling team members face this issue. Her suggested steps, in summary, are:

If team members are unwilling to accept any of these options, Adkins suggests that you let the matter drop. To effectively resolve conflicts, both parties must see the issue as a mutual problem and be willing to explore options together. If they are unwilling to do so, you will be unsuccessful in trying to impose a solution on them.

If you are successful in bringing conflicting parties together to resolve their problems, you might want to set up a few guidelines for them to follow as they work through the issue. To help the parties make the best use of this time, consider the following suggestions:

If the sides are still unable to resolve the conflict, you may be forced to bring in an outside party to act as a mediator. If that is necessary, make sure that the person chosen is a neutral party with no stake in the resolution, to ensure that the mediation is fair to all involved.

For teams that learn to resolve problems on their own, conflict can become a useful tool, rather than a painful or destructive one. These teams use conflict to uncover issues that impede progress and to clarify issues that prevent success. The adversity that high-performing teams overcome actually strengthens the team and teaches them new skills. But any resolutions that teams develop must solve conflicts while still respecting the people involved.

Marissa Davisson sighed as she walked down the hall. “Well, that didn’t go well.”

A few months ago, Davisson had become an Agile project manager at Steelhead Biotechnologies, a laboratory instrument developer in Portland, Oregon, and this was the first significant challenge she had faced. Davisson was part of a team responsible for upgrading one of Steelhead’s microplate readers, and the team had just finished its second iteration earlier in the week.

Talia Adams, one of her team members, had come to Davisson’s office yesterday with a complaint about another team member, Leanne Moravian.

Adams said that Moravian wasn’t “pulling her weight” and that she took only the easiest tasks from the task list and left the tougher ones for other team members.

“Can you meet with Moravian to fix the matter?” Adams asked. “I mean, it will sink in if it’s coming from you.”

Davisson agreed to address the matter with Moravian and she arranged a meeting later in the day. “I will tell Leanne that you’ve raised the issue,” Davisson said. “So it may be awkward between the two of you.”

“That’s OK,” Adams said. “As long as you get the problem fixed, I can deal with Leanne not being happy with me.”

But when Davisson explained that Adams had complained about Moravian’s behavior, Moravian had looked stunned, then became angry.

“I’m doing more work than she is!” Moravian said. “The tasks I volunteer to do might look easy on paper, but every one of them takes three times longer than anything Adams chooses. Talia grabs the shorter tasks so she can make it look like she’s doing more work! But her work is no more technically difficult than mine.”

When Davisson went back to Adams’ work station to explain Moravian’s reply, Adams shook her head. “That’s not true” she said. “Just compare the complexity level of the work involved; anyone can see that she’s taking the easier tasks. She’s pointing the finger at me so that you don’t take a close look at how she’s been manipulating the situation.”

Now, Davisson had two angry team members and found herself caught in the middle of their conflict. She headed back to her office to plan her next steps.

Recommended for you Scope Management In Agile “Best Practices”

Answer the question in the textbox, then click Submit to compare your answer to an answer written by an experienced project manager.

How could Davisson have better handled the situation?

Davisson rushed in to solve the problem by herself, instead of bringing the parties together to tackle the issue. Now she’s caught acting as a messenger between two team members who should be discussing their conflict directly. She should have suggested that Adams and Moravian meet to clarify the situation and calmly discuss their disagreement. She should then step in only if Adams and Moravian are unable to resolve the conflict themselves.

As the project manager, Davisson’s job is to remove obstacles so the team can work toward a solution, not to resolve problems herself. By pushing for a quick resolution, Davisson lost a chance to help her team members learn how to address interpersonal issues and find mutually acceptable solutions—relationship skills that will be needed throughout the project.

She also let both women make an assumption about the other’s motivation, without verifying whether the assumptions were true. Davisson never explored the issue to let each team member explain their intentions.

Davisson should have considered openly addressing the conflict in the daily stand-up, and using it as a teaching moment. She would have to weigh the potential embarrassment for Adams and Moravian and decide whether the issues involved have broader implications for the workings of the team. If she is convinced that clarifying the issues around selecting tasks-to-do will benefit the team in the future she may very well want to have Adams and Moravian raise the topic in the daily meeting.

Recommended for you Agile Leadership

What is a Product Backlog in Agile? 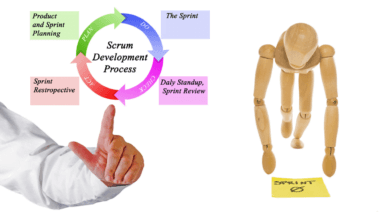